Madame Tussauds Hollywood Review
My First Time on the Red Carpet, Visiting the Oval Office, and Clubbing Some Woman after my Husband.

Disclosure: Madame Tussauds Hollywood and US Family Guide provided my family with tickets to visit the Wax museum to share my experience and review with you.  All opinions stated here are my own.

My family and I found ourselves in Hollywood this weekend to visit Madame Tussauds Hollywood Wax Museum.  We made our way down Hollywood Boulevard and the walk of fame when we came upon Madame Tussauds which sat right next door to the world famous TCL Chinese Theatre!

The TCL Chinese Theatre rises 90 feet high and two gigantic coral red columns topped by wrought iron masks hold aloft the bronze roof.  Between the columns is a 30 foot high dragon carved from stone. Guarding the theatre entrance to this day are the two original giant Heaven dogs brought over from China. The Chinese Theatre is the most sought after theater in Hollywood for studio premieres.  fans often flock to these events to see celebrities arrive and walk up the red carpet into the theatre.  Rich in movie tradition, with it's cement hand prints and footprints in the forecourt, the Chinese Theatre immortalizes the biggest stars.  More than four million visitors from all over the world visit the Chinese Theatre every year!

So we became five of the four million this year and checked out all the hand and feet print of some of the greatest stars before proceeding to Madame Tussauds! 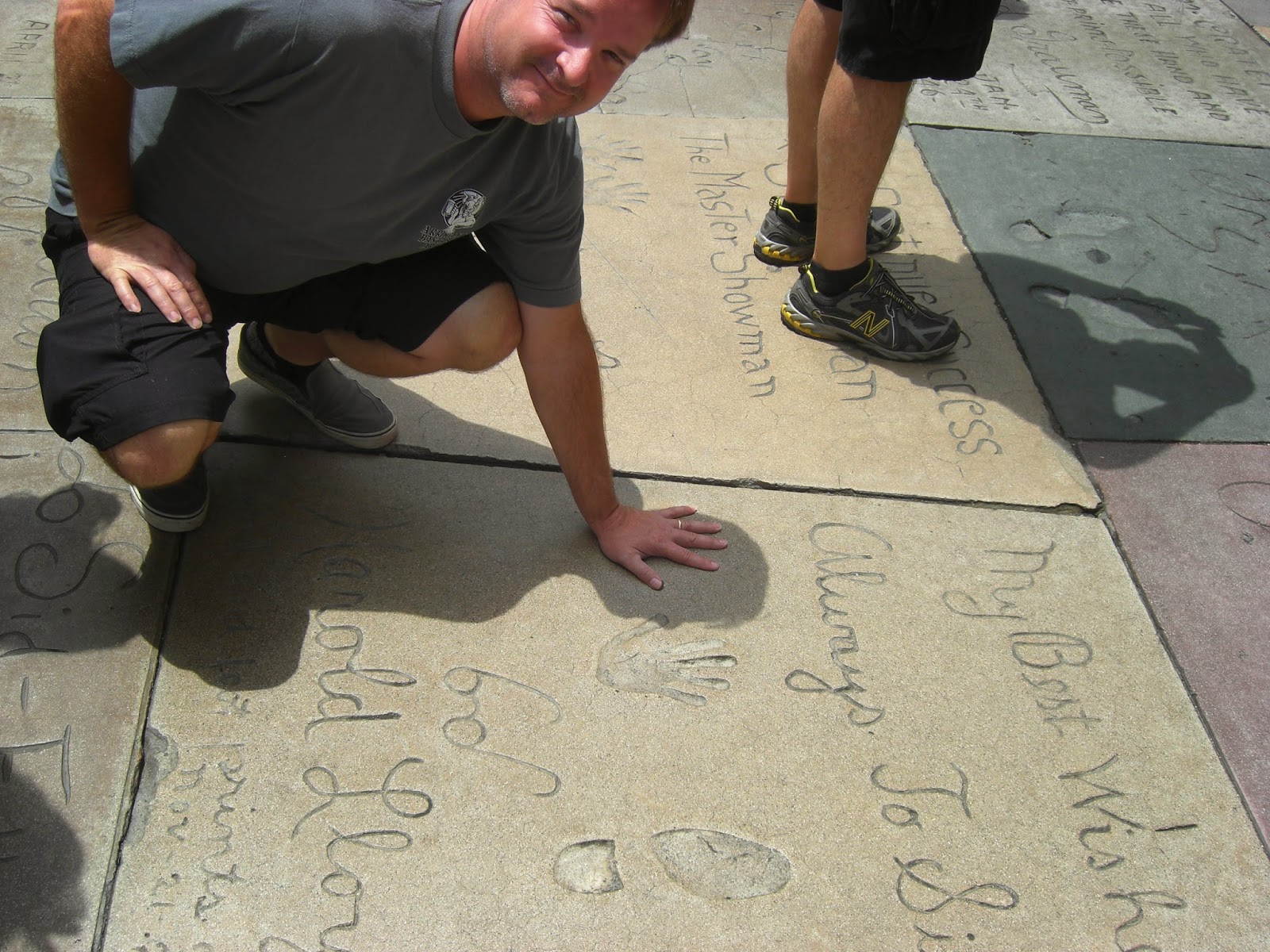 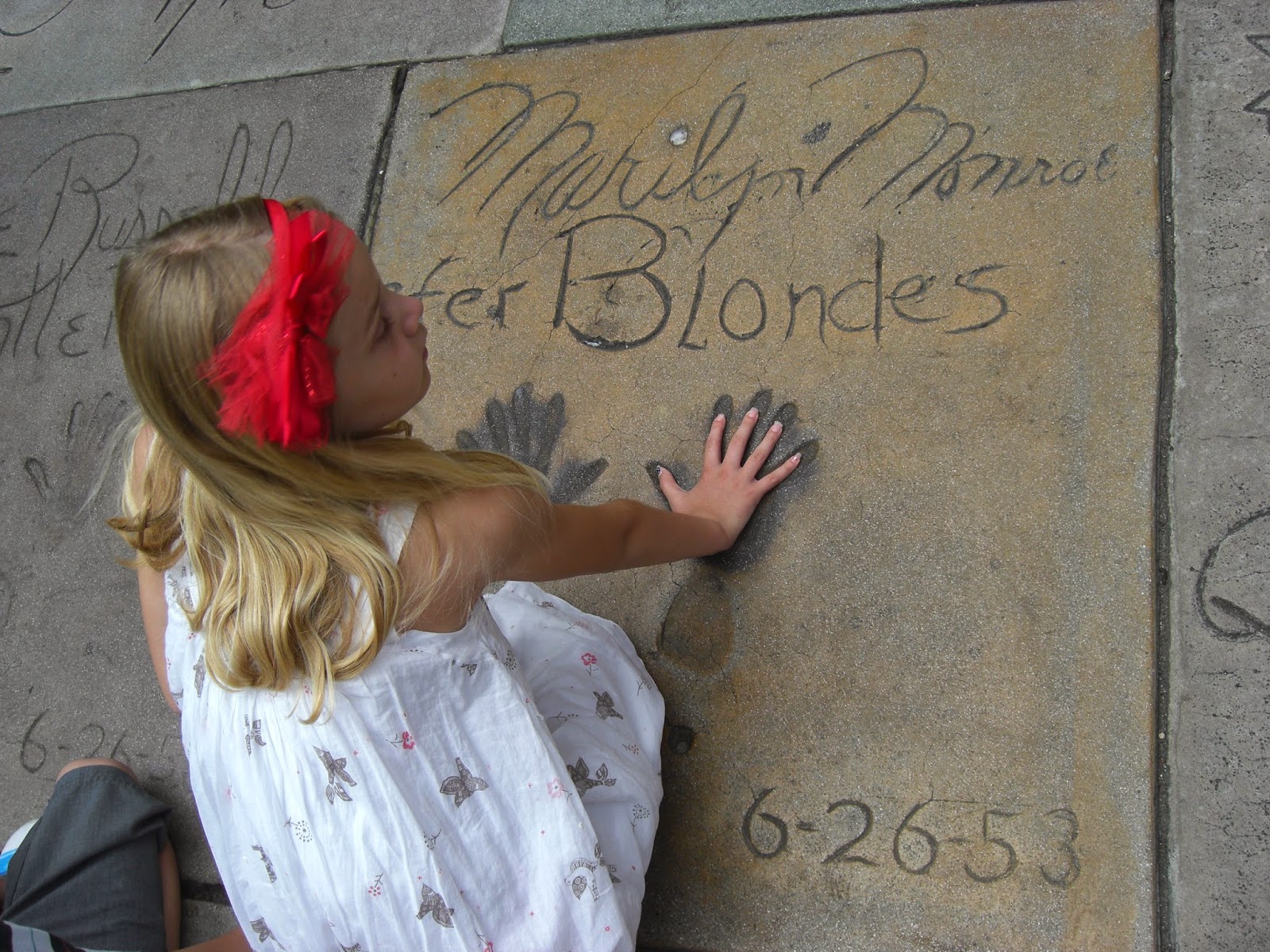 After we were done looking around the Chinese Theatre we stepped into madametussauds!  Upon entering we walked down the red carpet and was greeted by none other than Joan Rivers!  There was so much press and paparazzi we didn't know how to act so we just threw up some peace signs it was all a little intimidating being so famous and all...we were a pretty big deal! 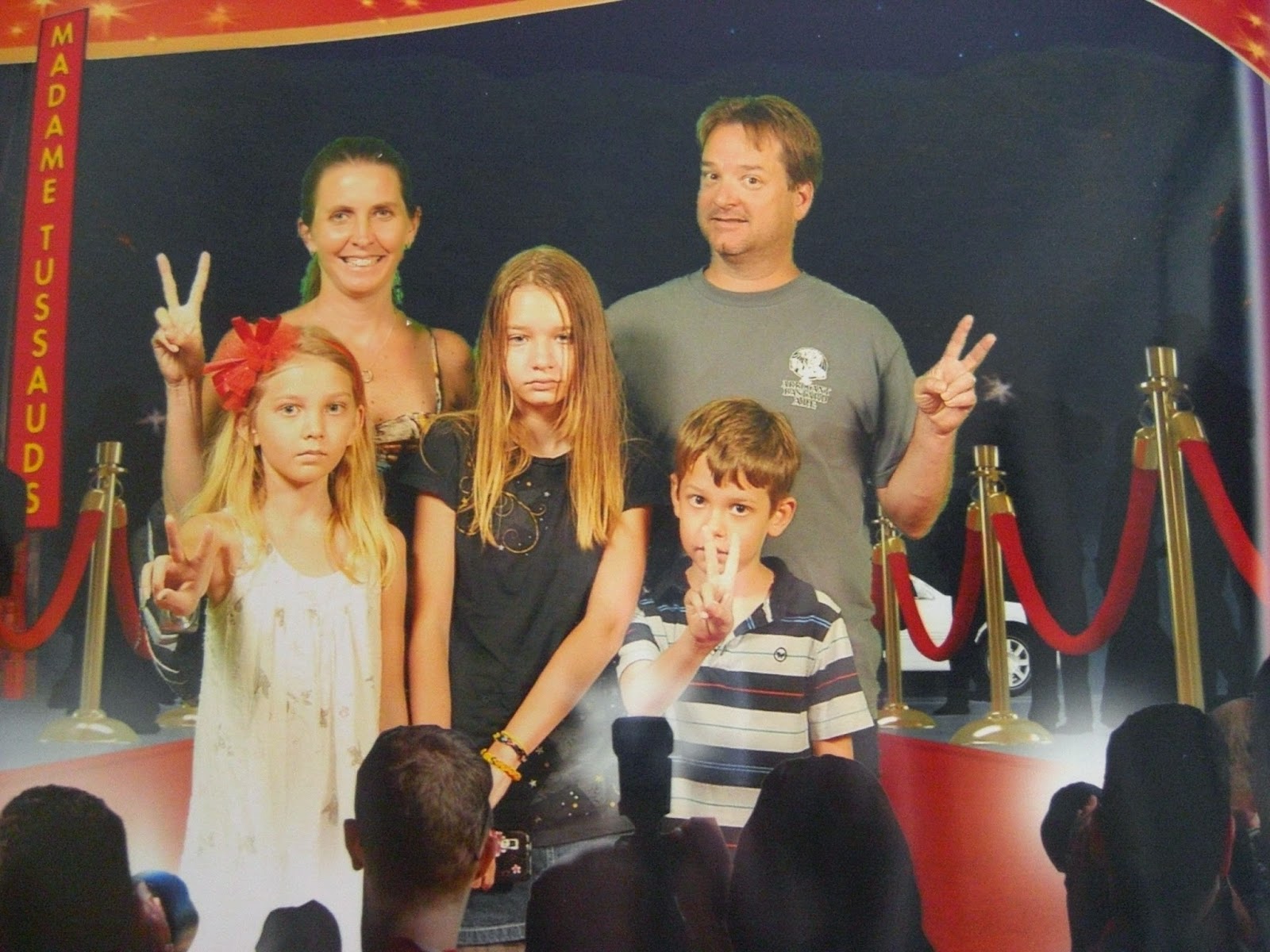 Next we took an elevator down a couple floors to The A-List party!  It was the hottest party in town that day.  We were bumping elbows with Angelina Jolie and Brad Pit, Simon Cowell, Rihanna, Beyonce just to name a few! 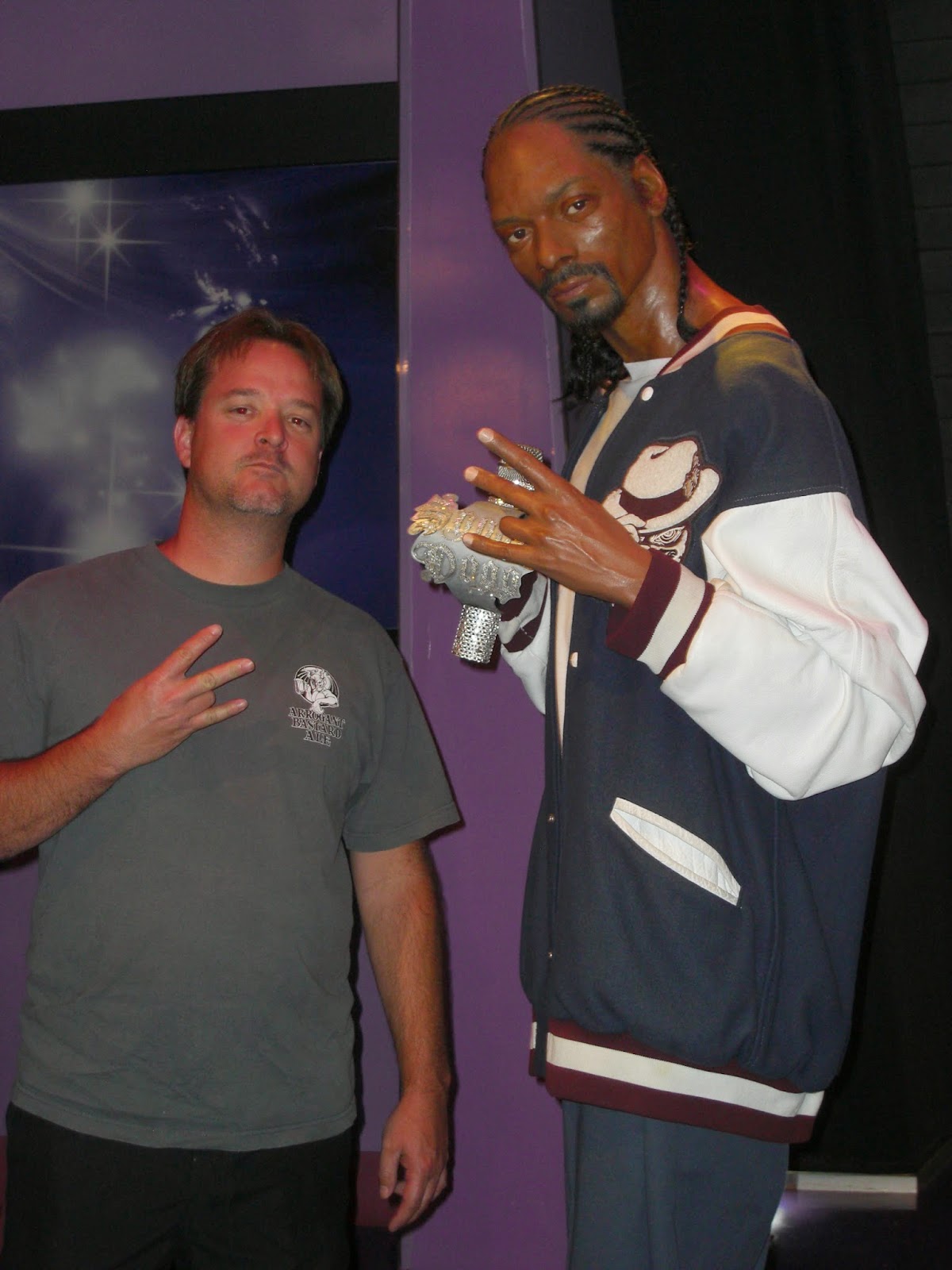 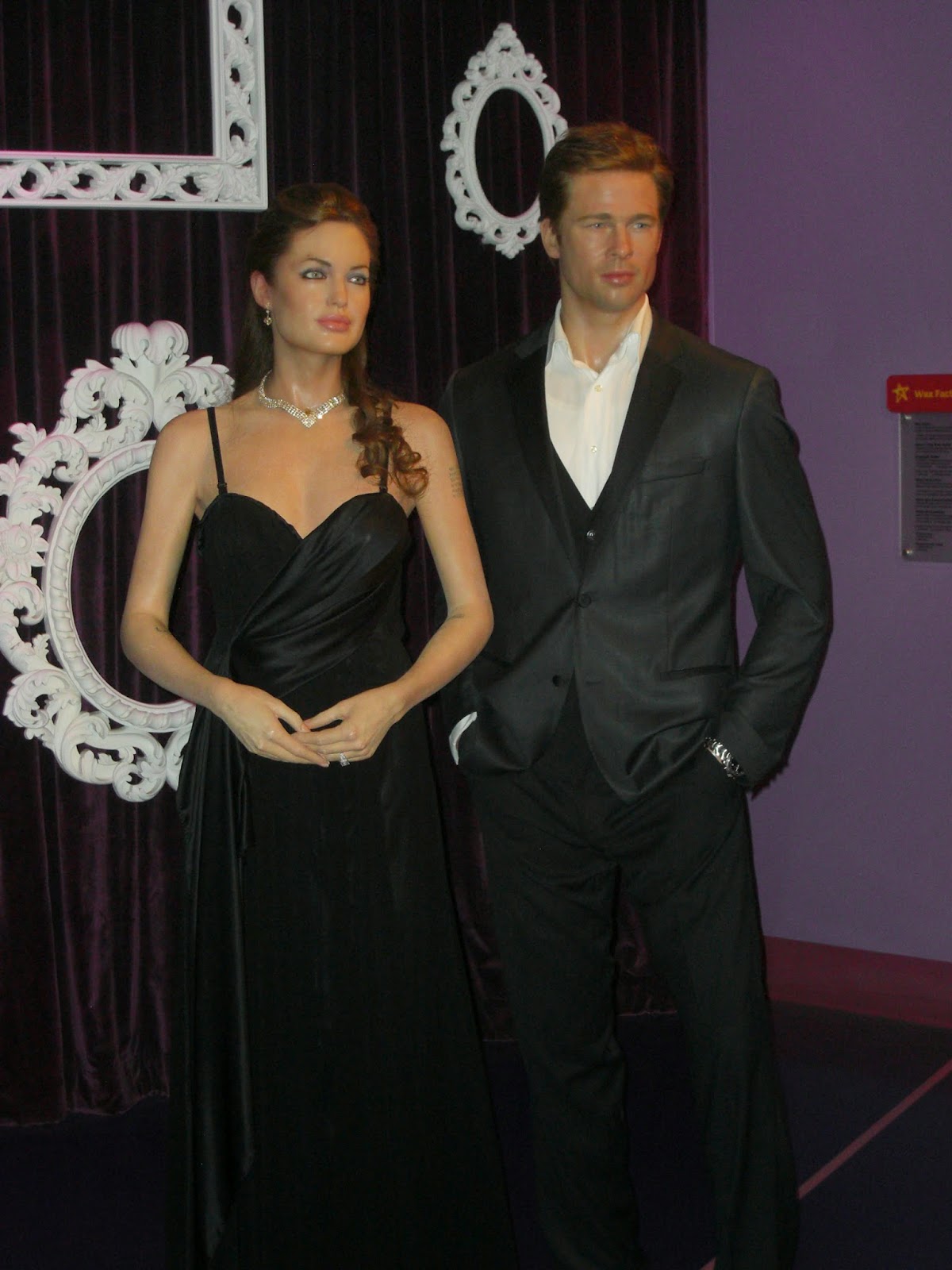 My husband even joined in on the dance floor! 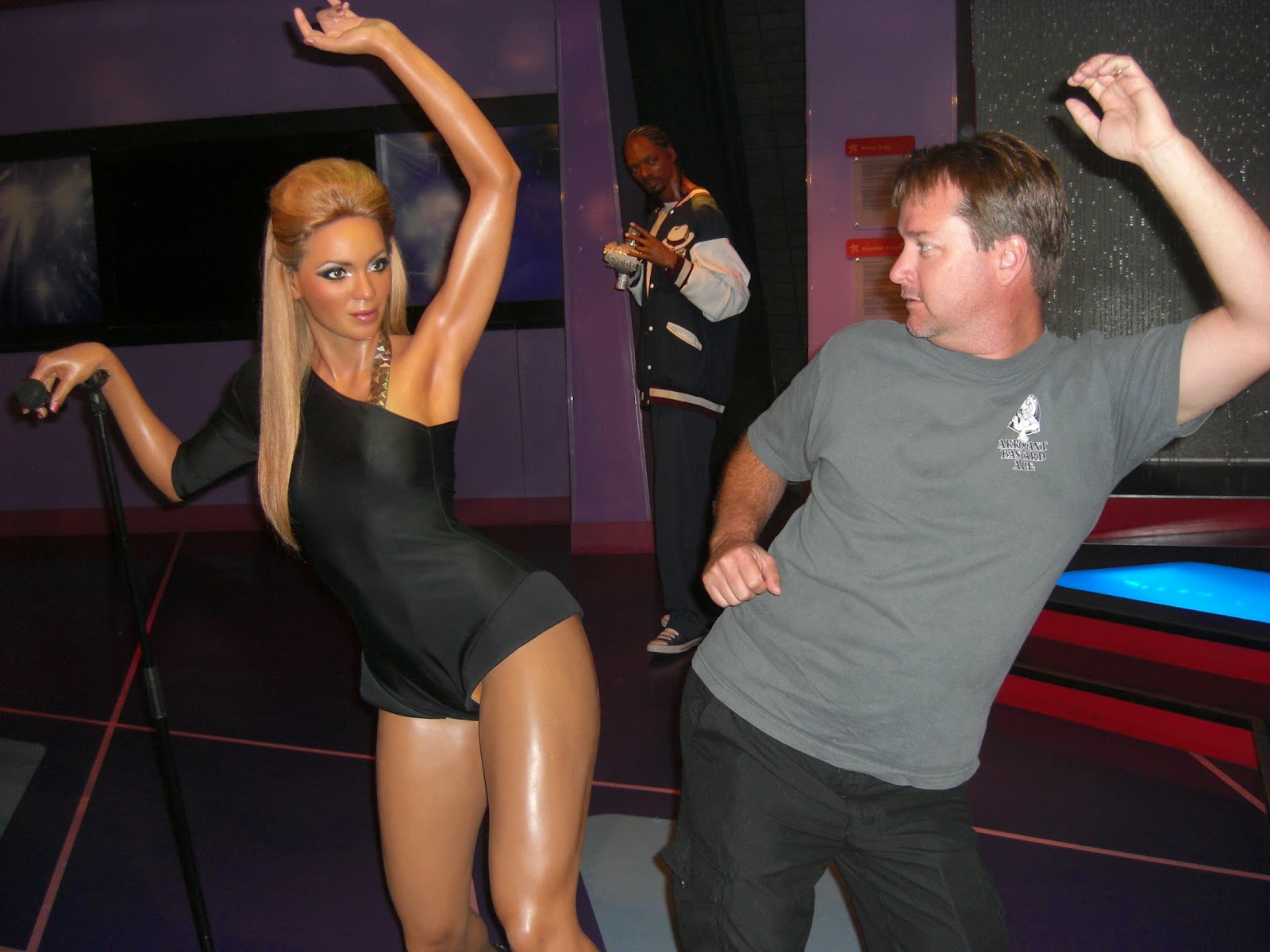 After the A-list party we went on to meet some other great folks like Betty white, she was such a nice lady! 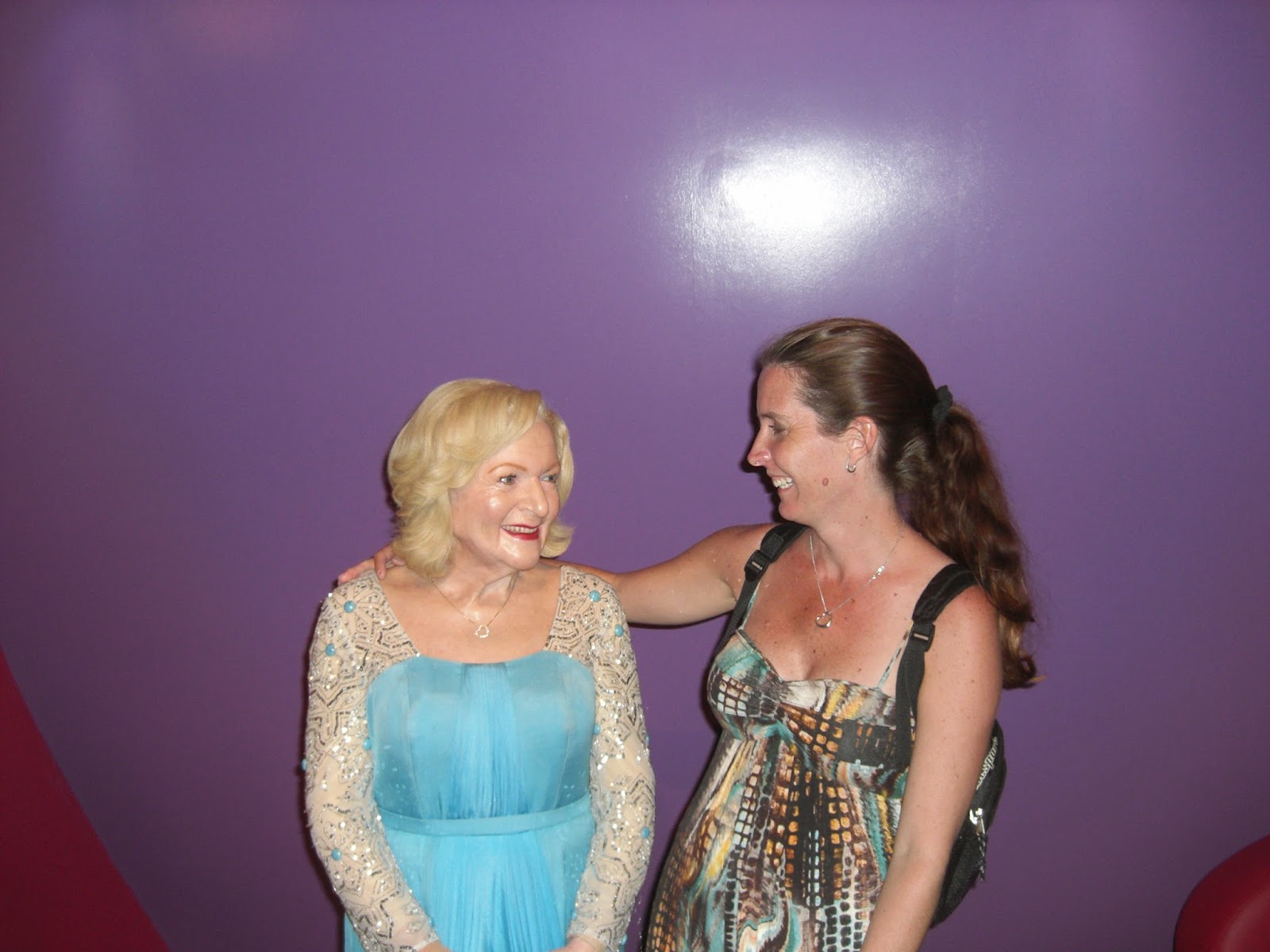 I hung out at the bar with Morgan freeman and Carol Burnett seemed to have had too much to drink! 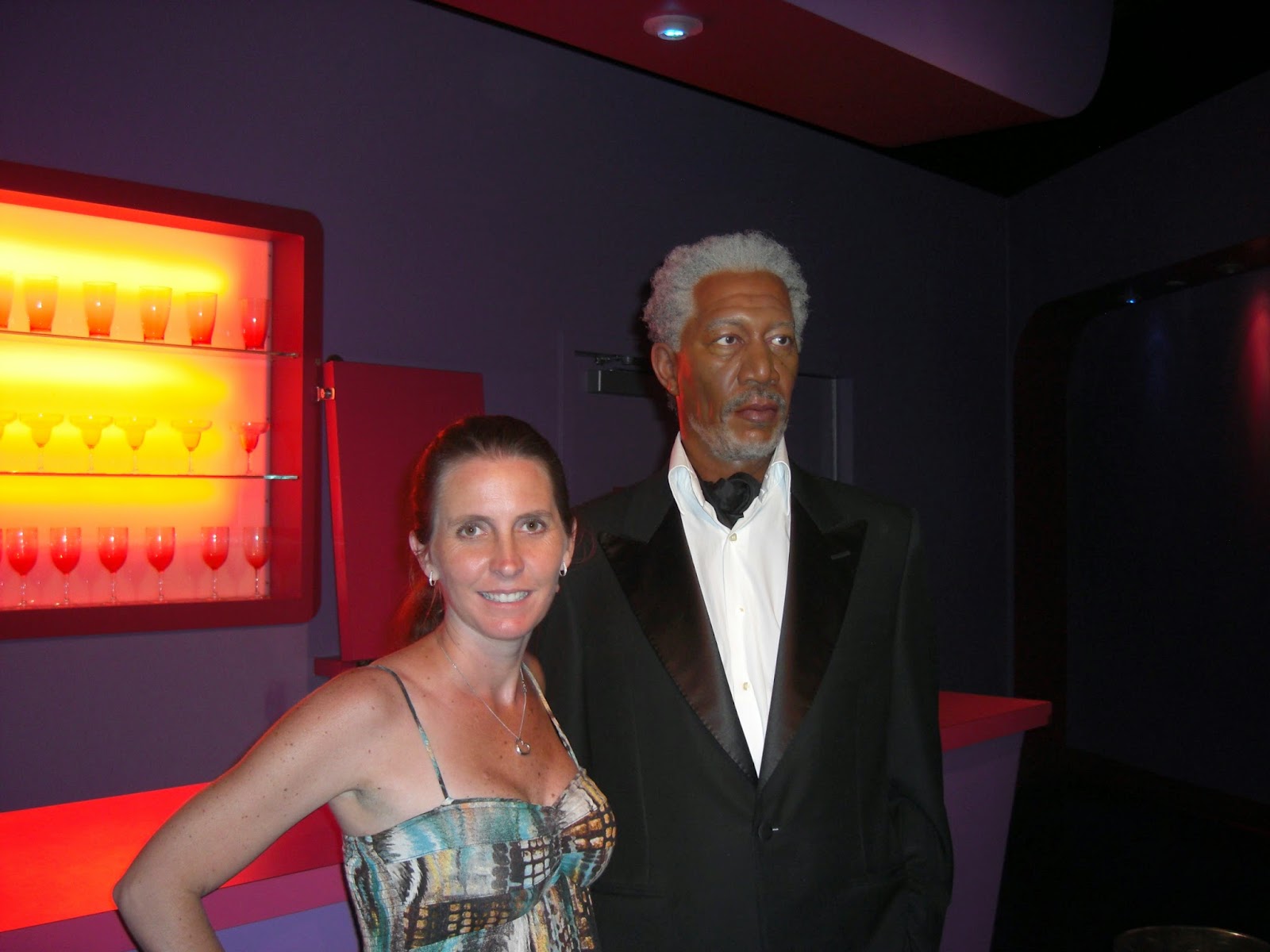 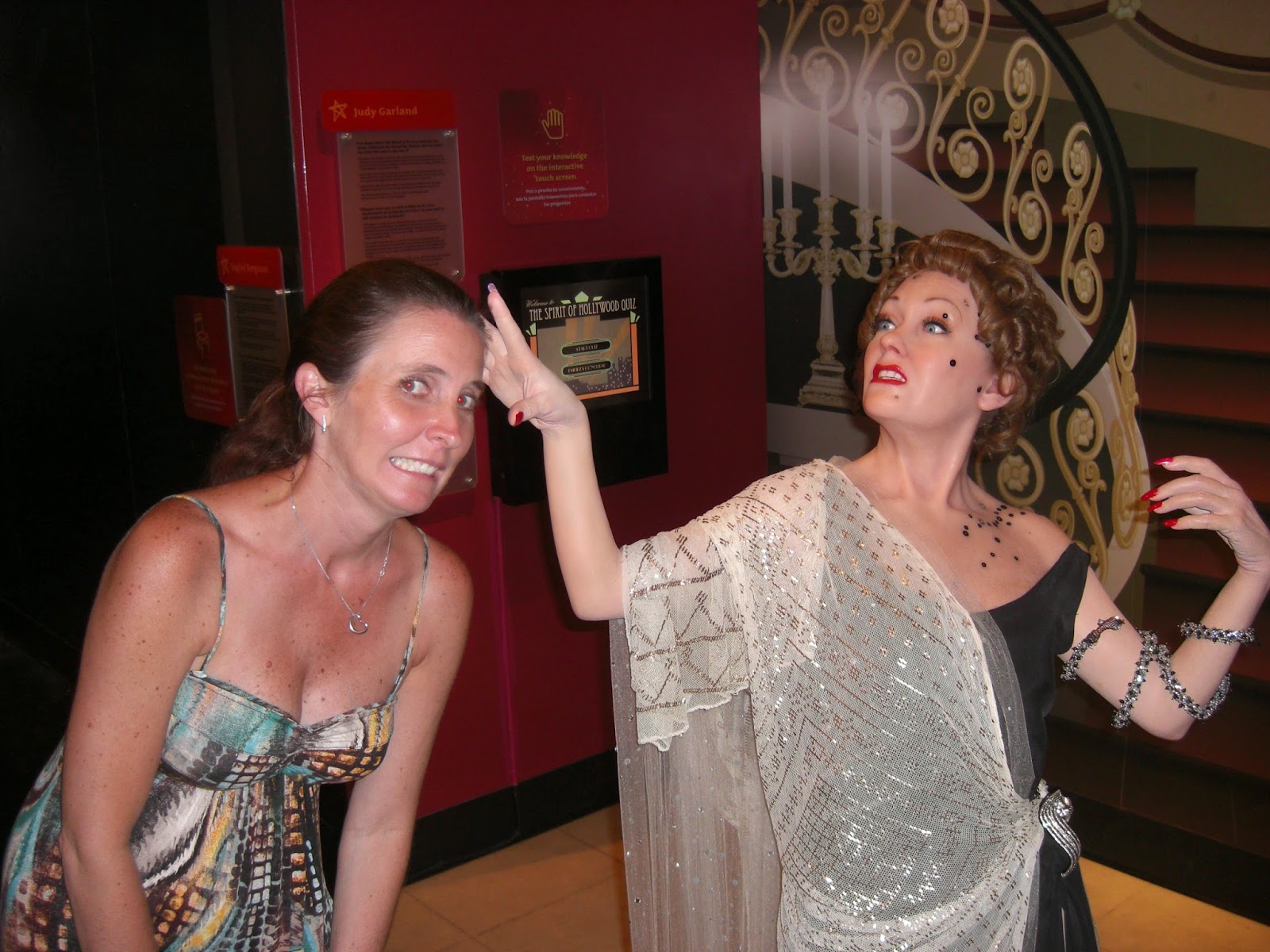 Then to my surprise Some lady by the name of Raquel Welch from like One Million Years B.C was trying to pick up my husband...so I clubbed her!! 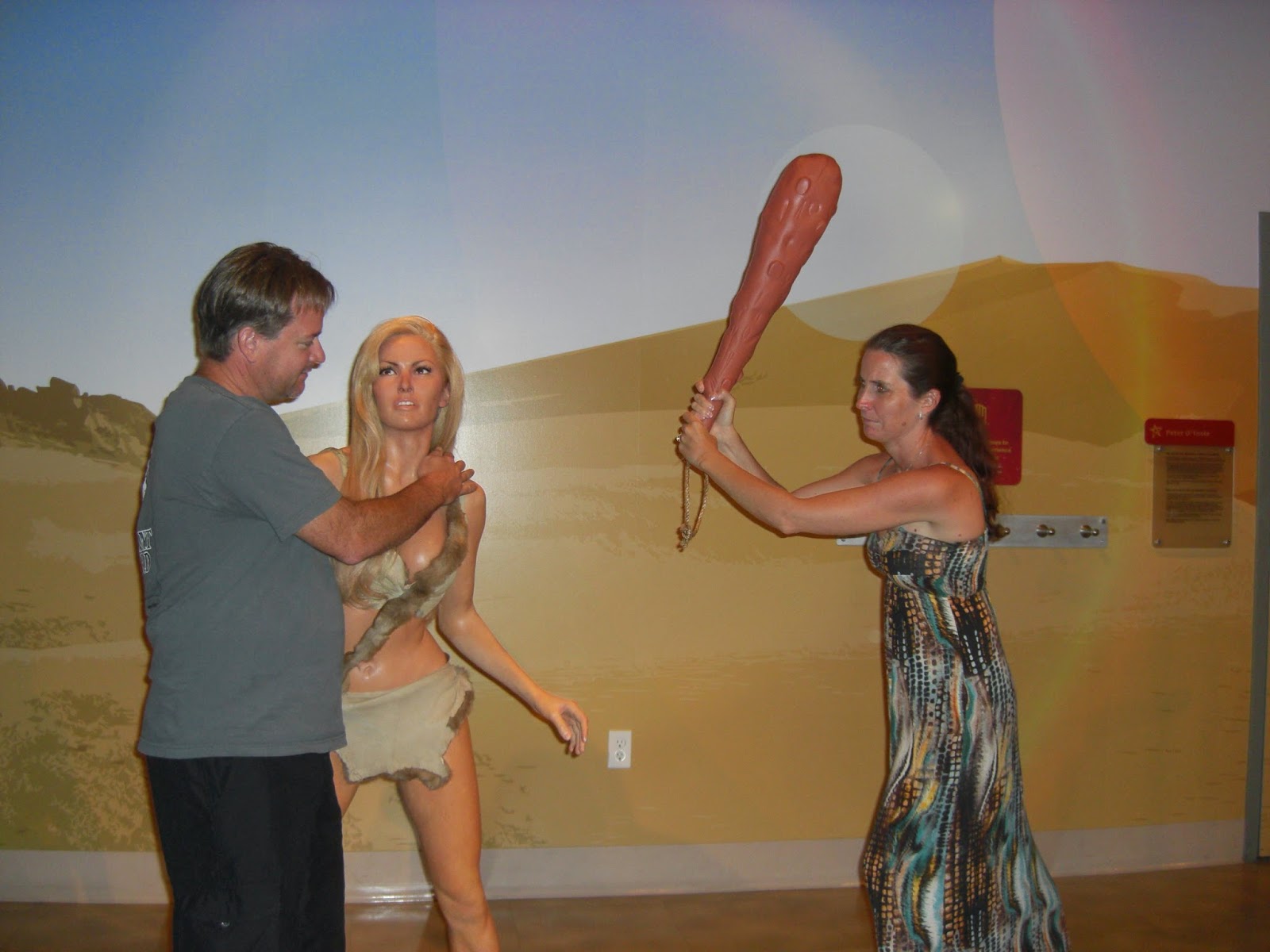 Next I was called into the Oval office to go over some current events with The President!  Our country is in turmoil and we needed the help of some super heroes, so I called in some of the best! 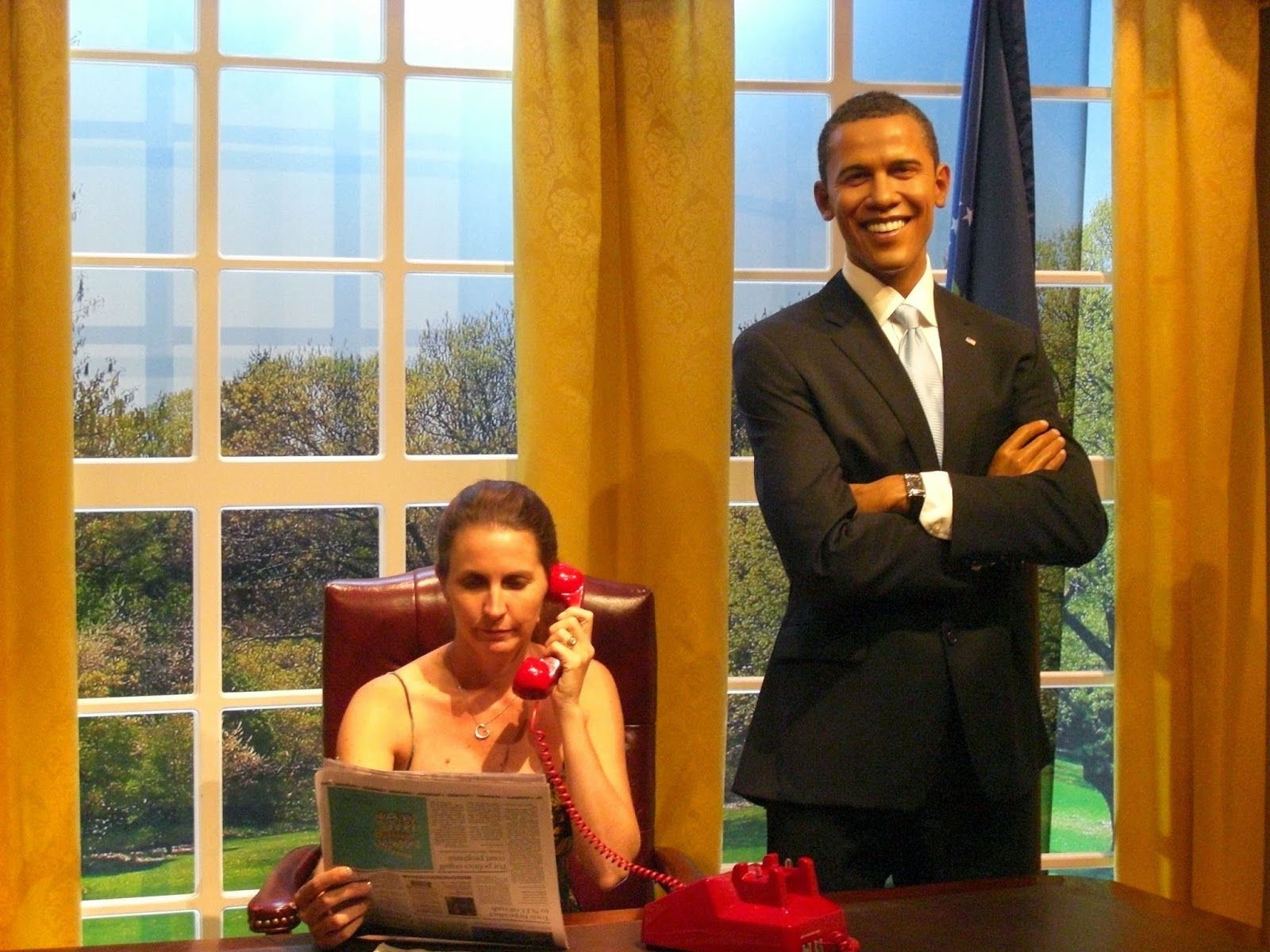 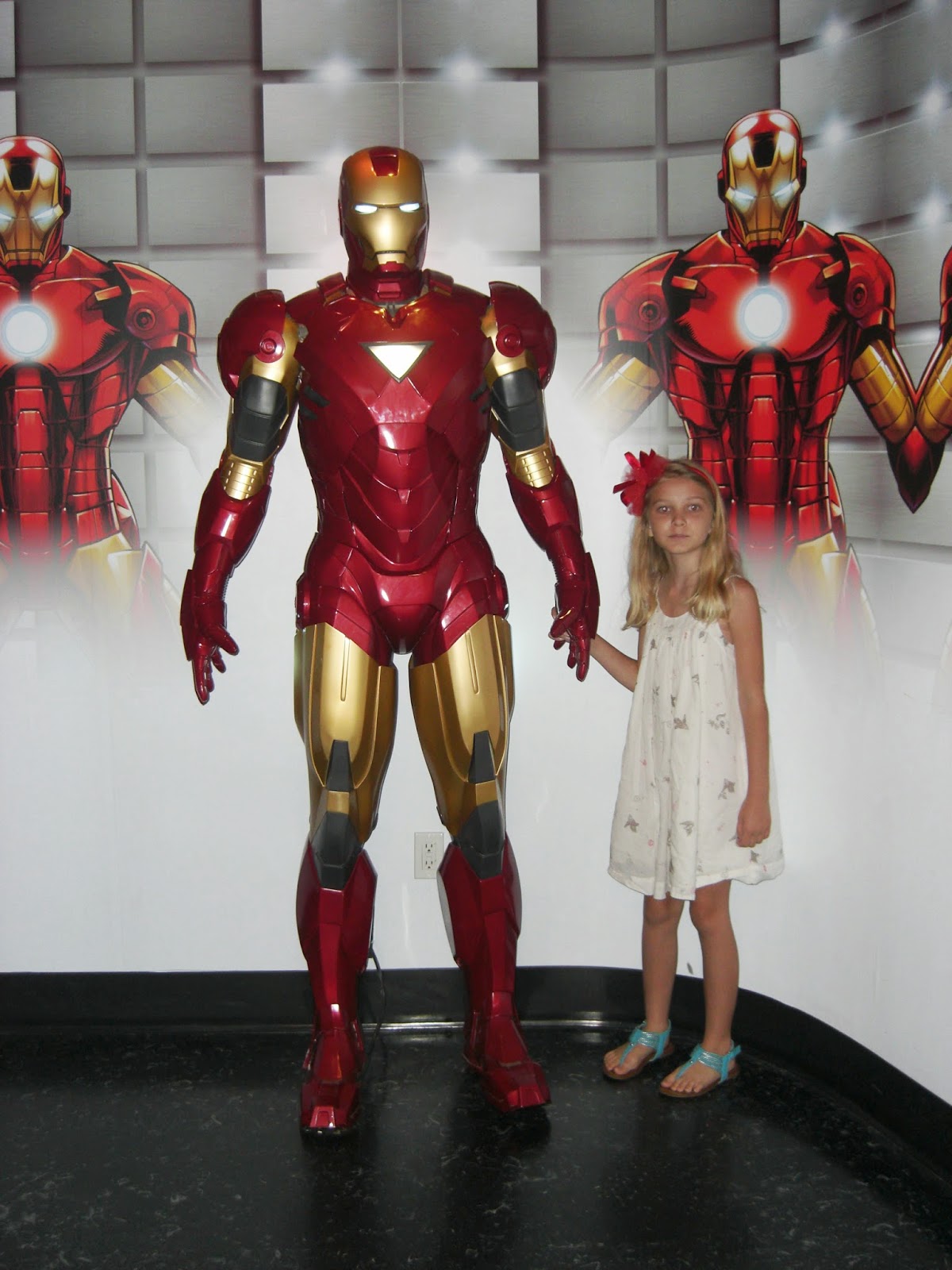 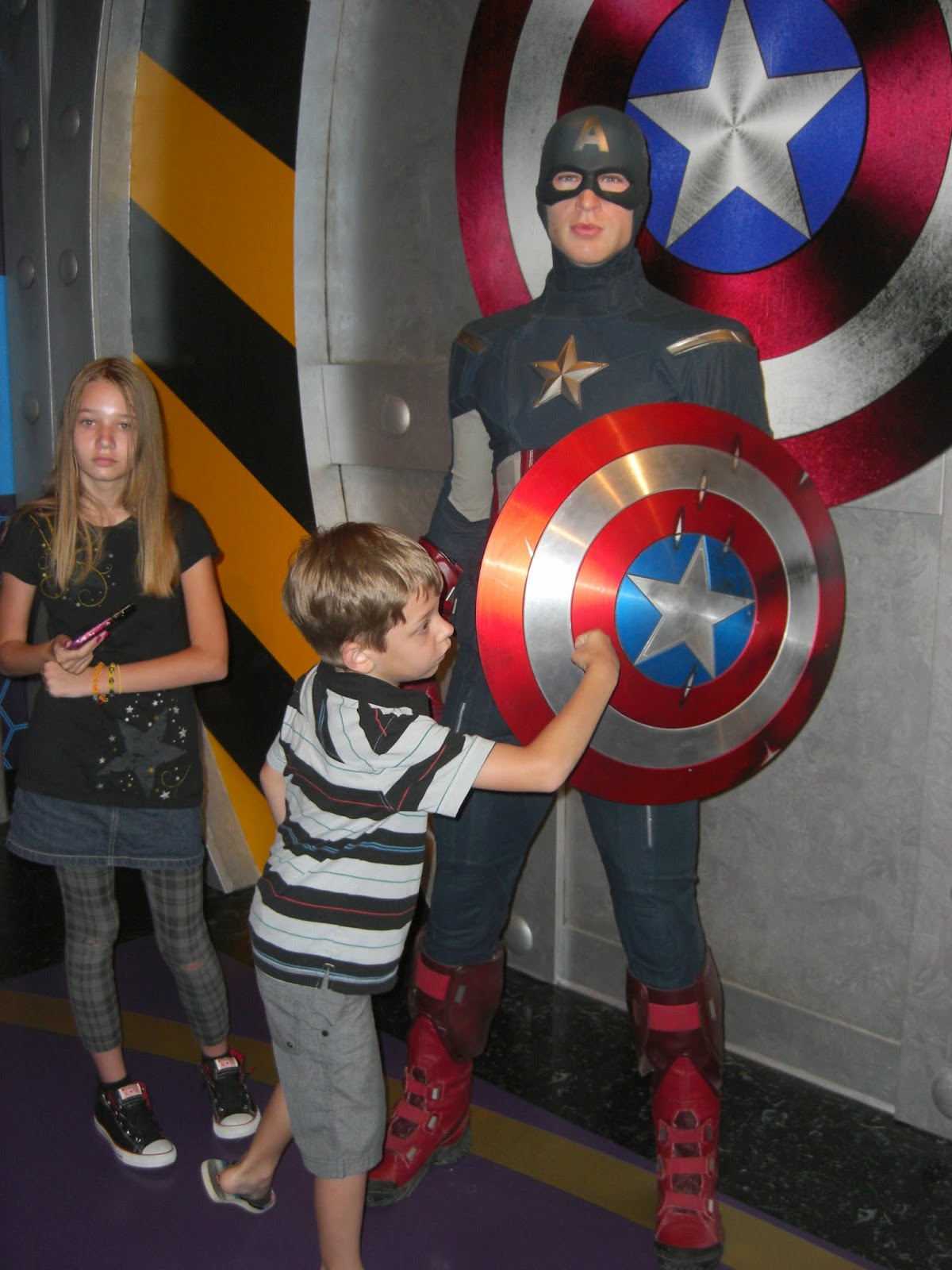 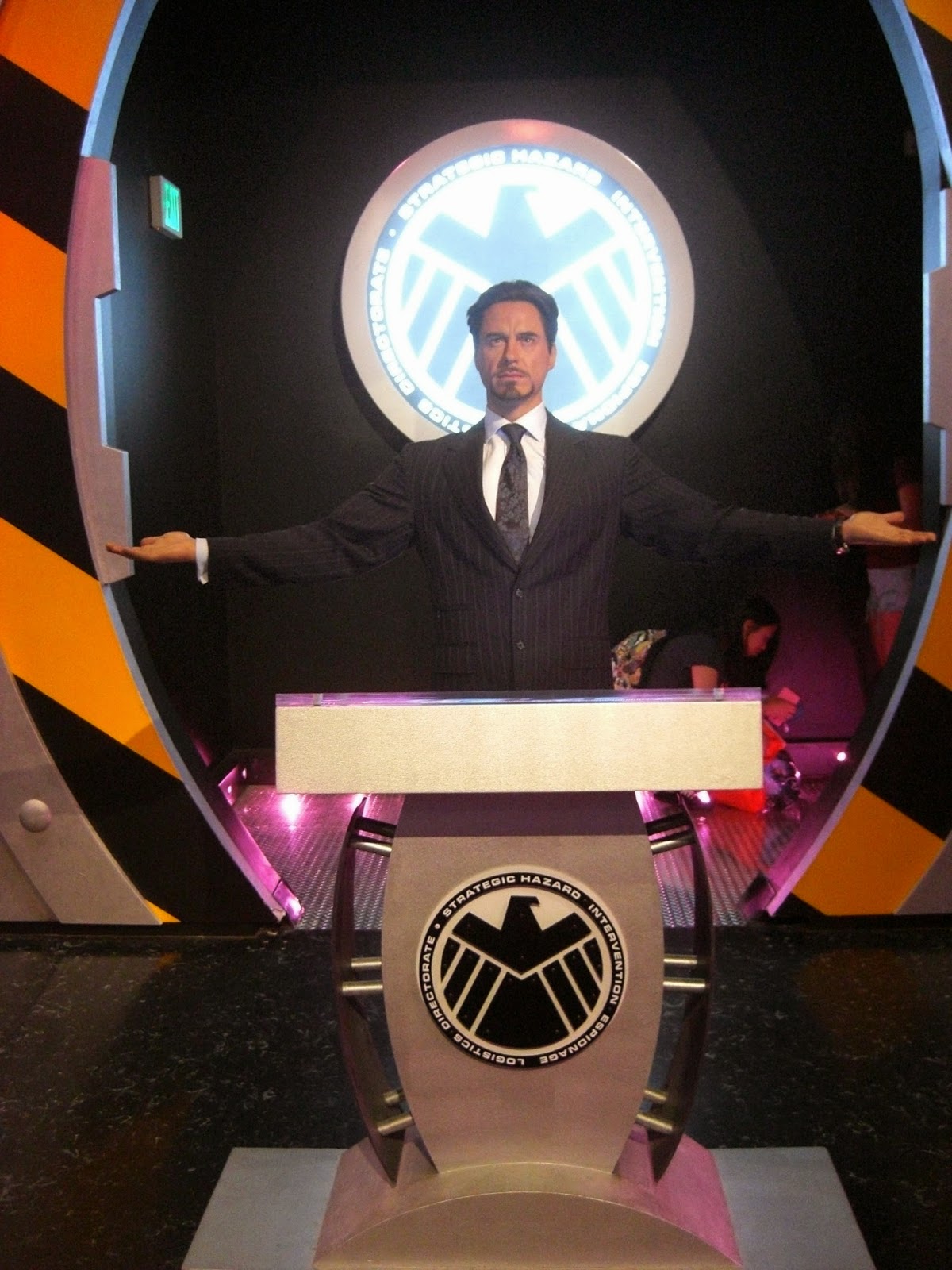 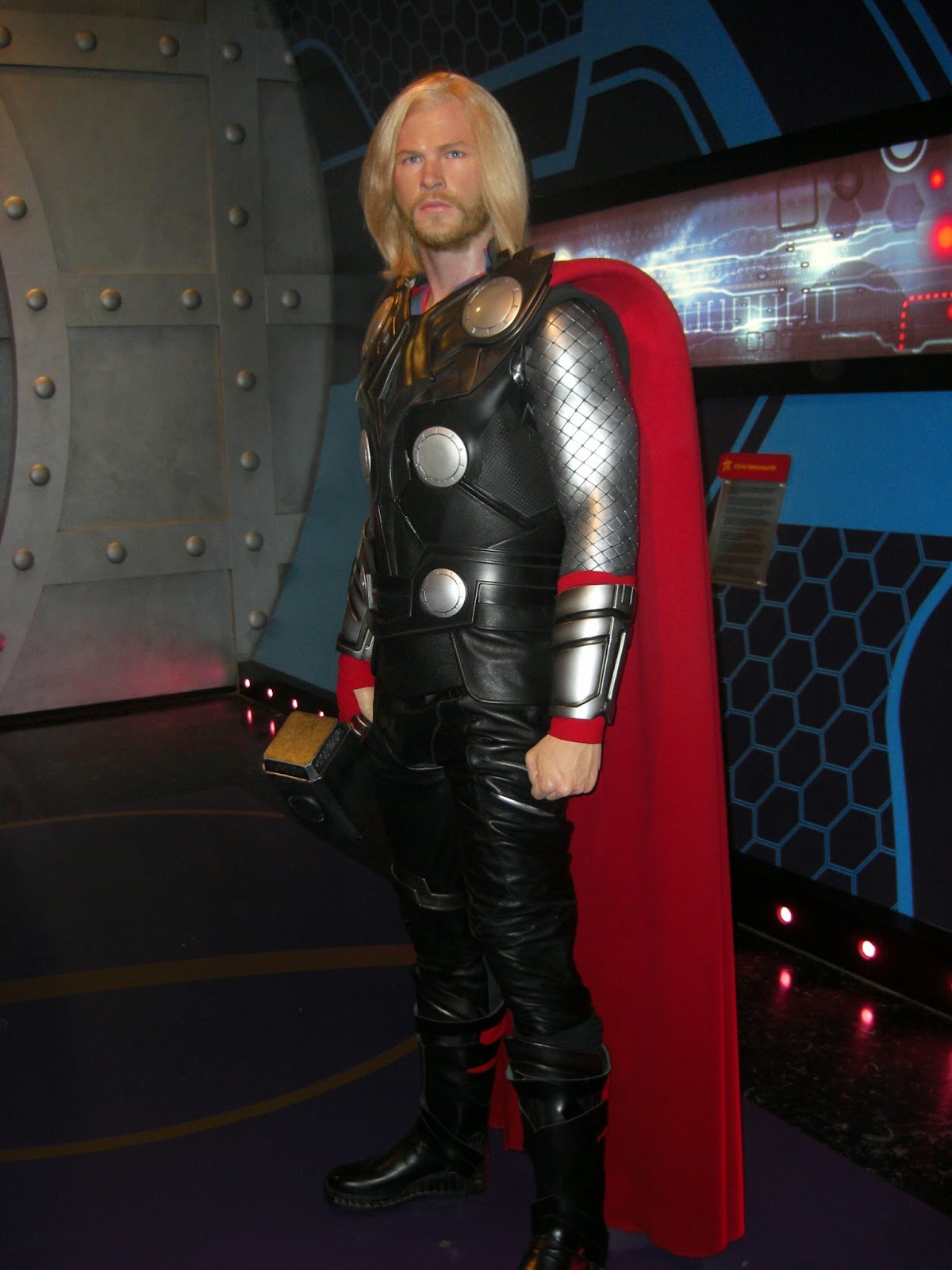 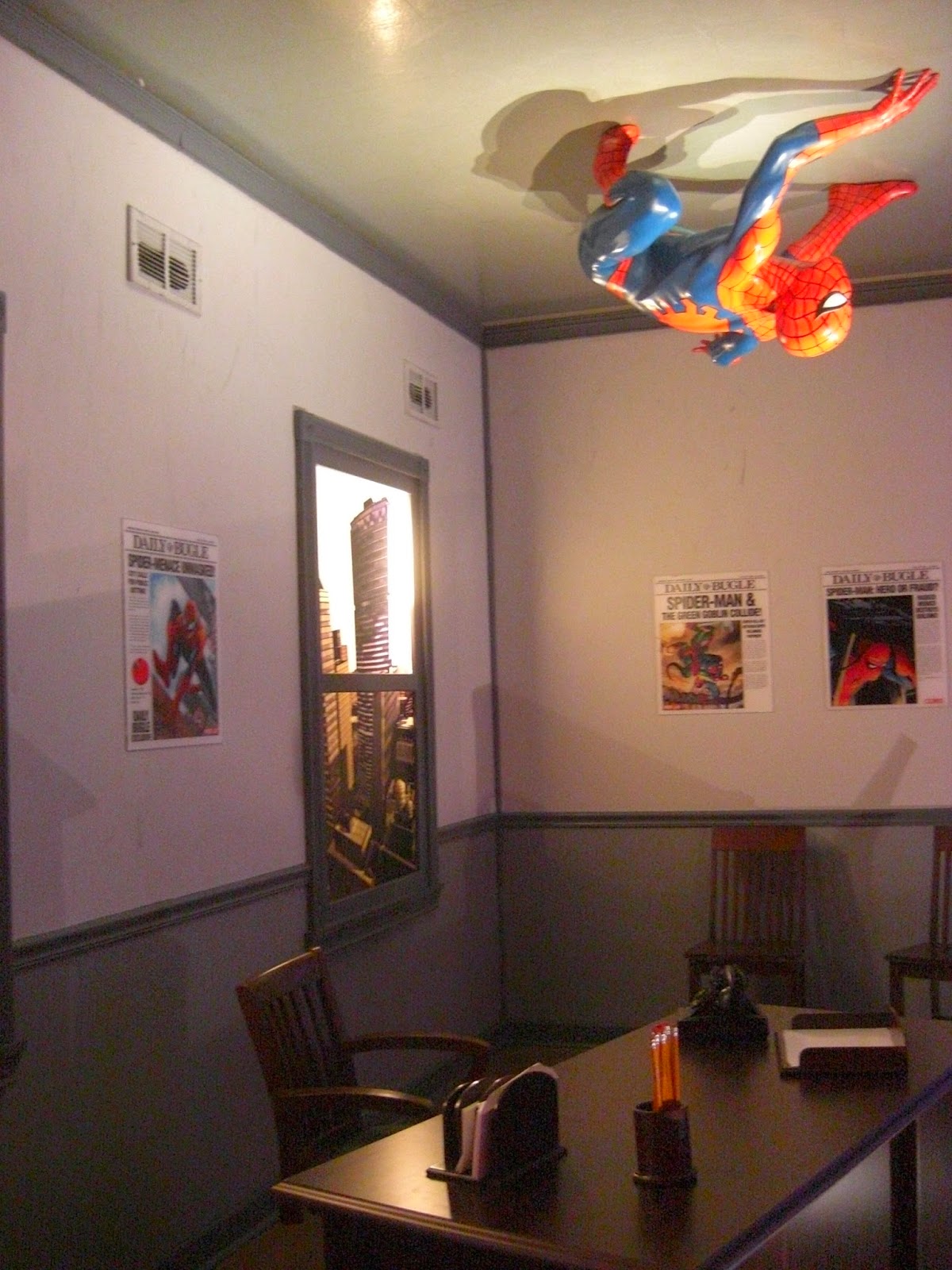 OK Maybe I wasn't on the red carpet, and maybe I didn't REALLY meet all these stars, but we sure had a lot of fun pretending!!  The Madame Tussauds  is a famed attraction in Los Angeles premiere Hollywood destination offering guests the worlds only opportunity to interact with over 125 incredibly lifelike iconic figures from celebrity worlds of film, TV, music, sports, and politics!  This year alone Madame Tussauds Hollywood is launching 12 new figures in 12 months more than ever in one year!

After we interacted with all the great wax figures and took literally hundreds of photographs, we went on to Madamm Tussauds latest attraction!  Madam Tussauds and Marvel have collaborated to bring a new 4D theater and superhero film for attraction goers! 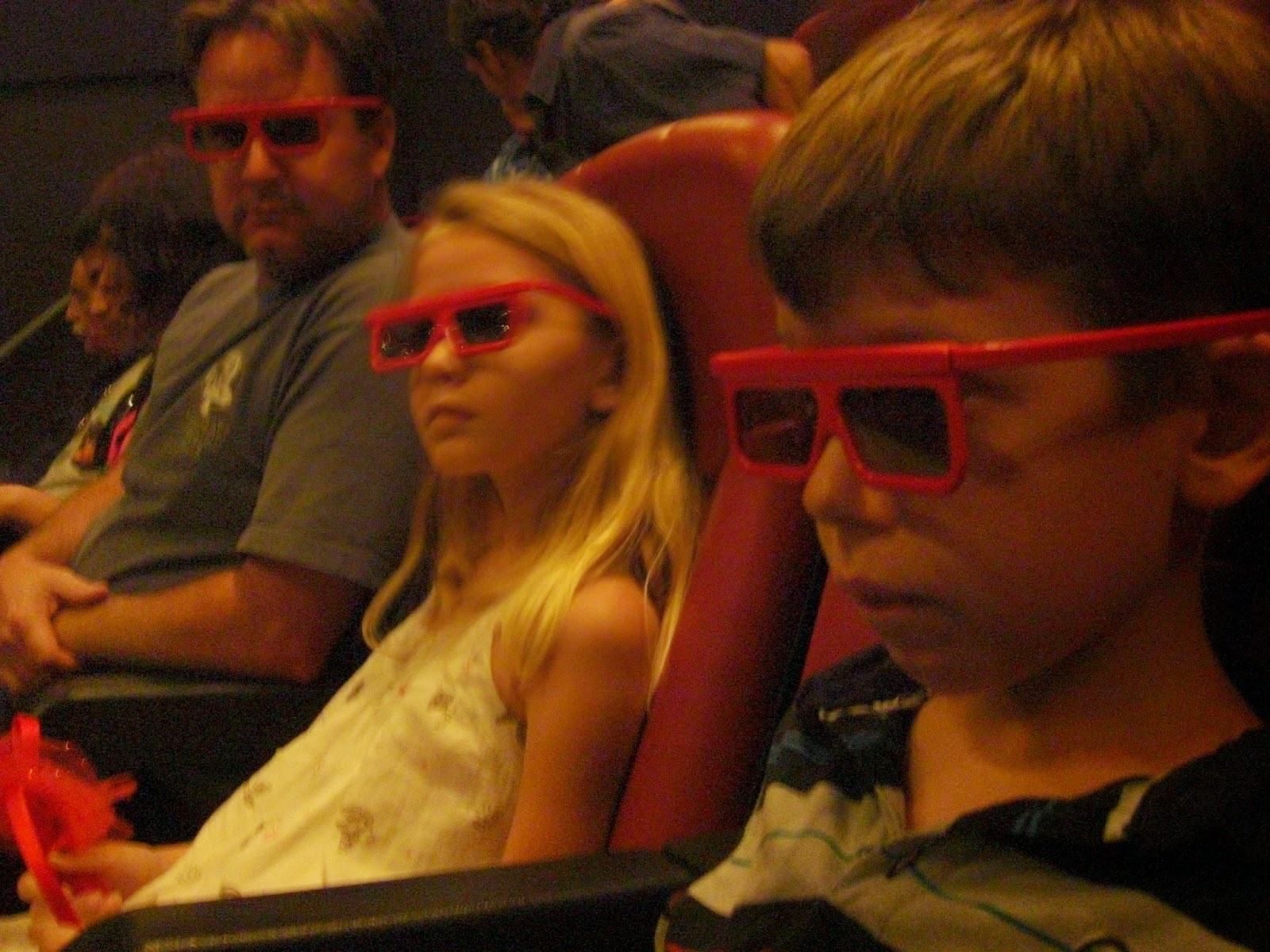 On July 11, 2014, Madame Tussauds Hollywood announced the grand opening of their brand new, multi-million dollar Marvel super heroes 4D theater expansion bringing their most legendary super heroes to life!  The innovative 4D experience with Multi sensory entertainment includes water, smoke, and trembles in your seat, allowing visitors to come face to face with the action!  My family thought this was really cool!  You really feel like you are in the movie!!  It was amazing!  The Theater is equipped with 74 seats and a screen size of 25x17 ft for maximum viewing.

Well I can talk all day about the great time we had at Madame Tussauds, but these movies are not going to direct themselves, so I better go! 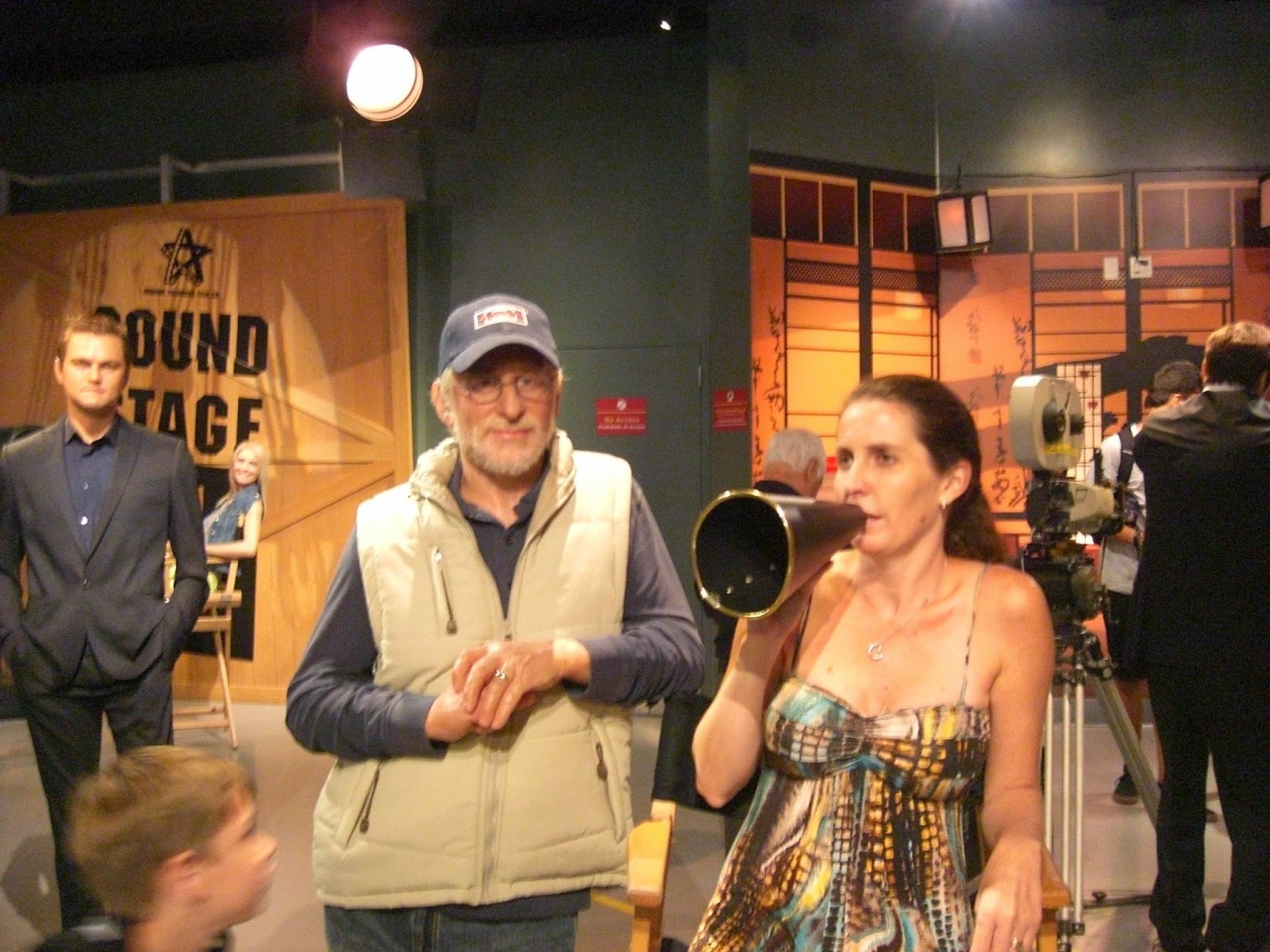 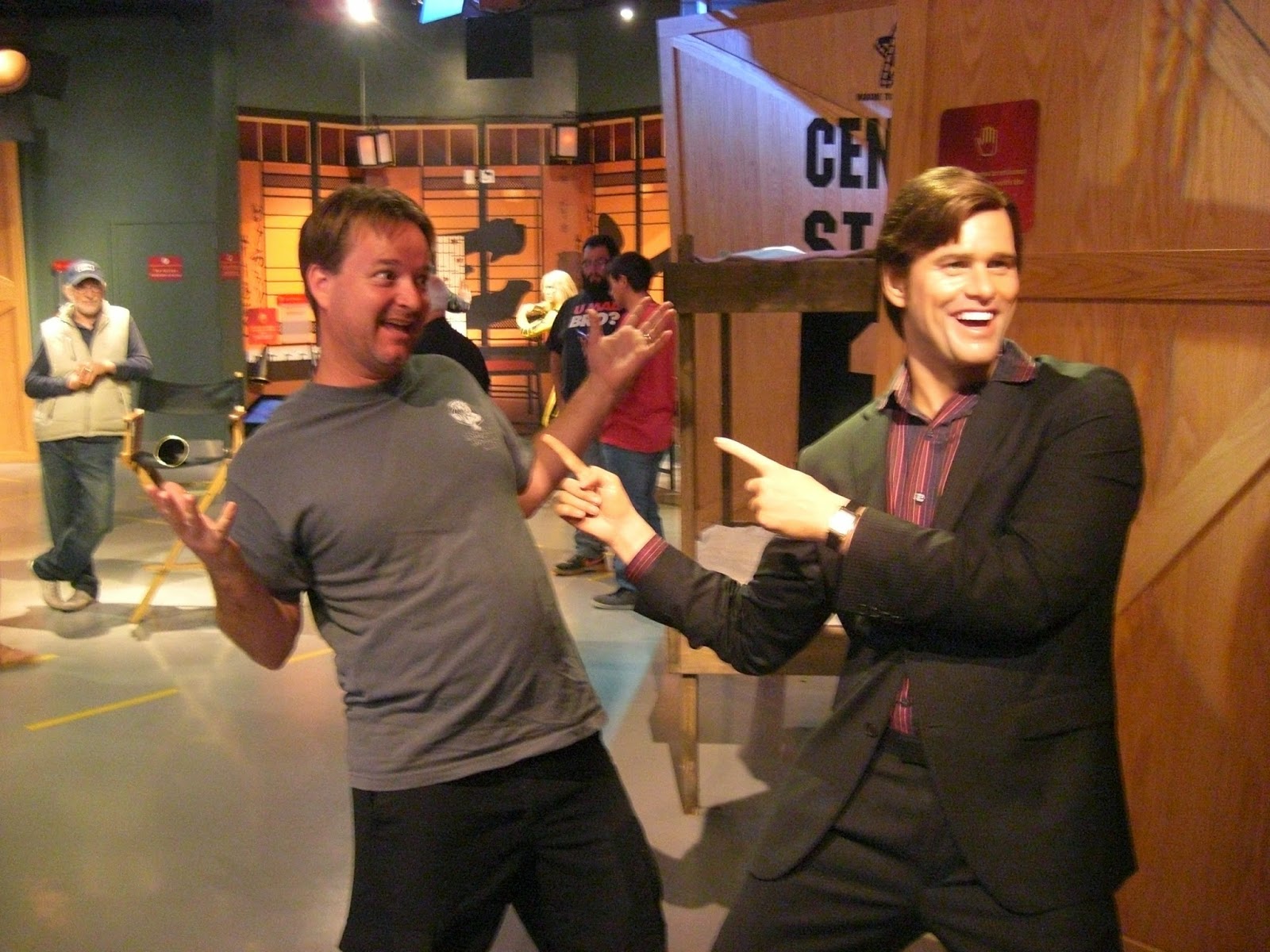 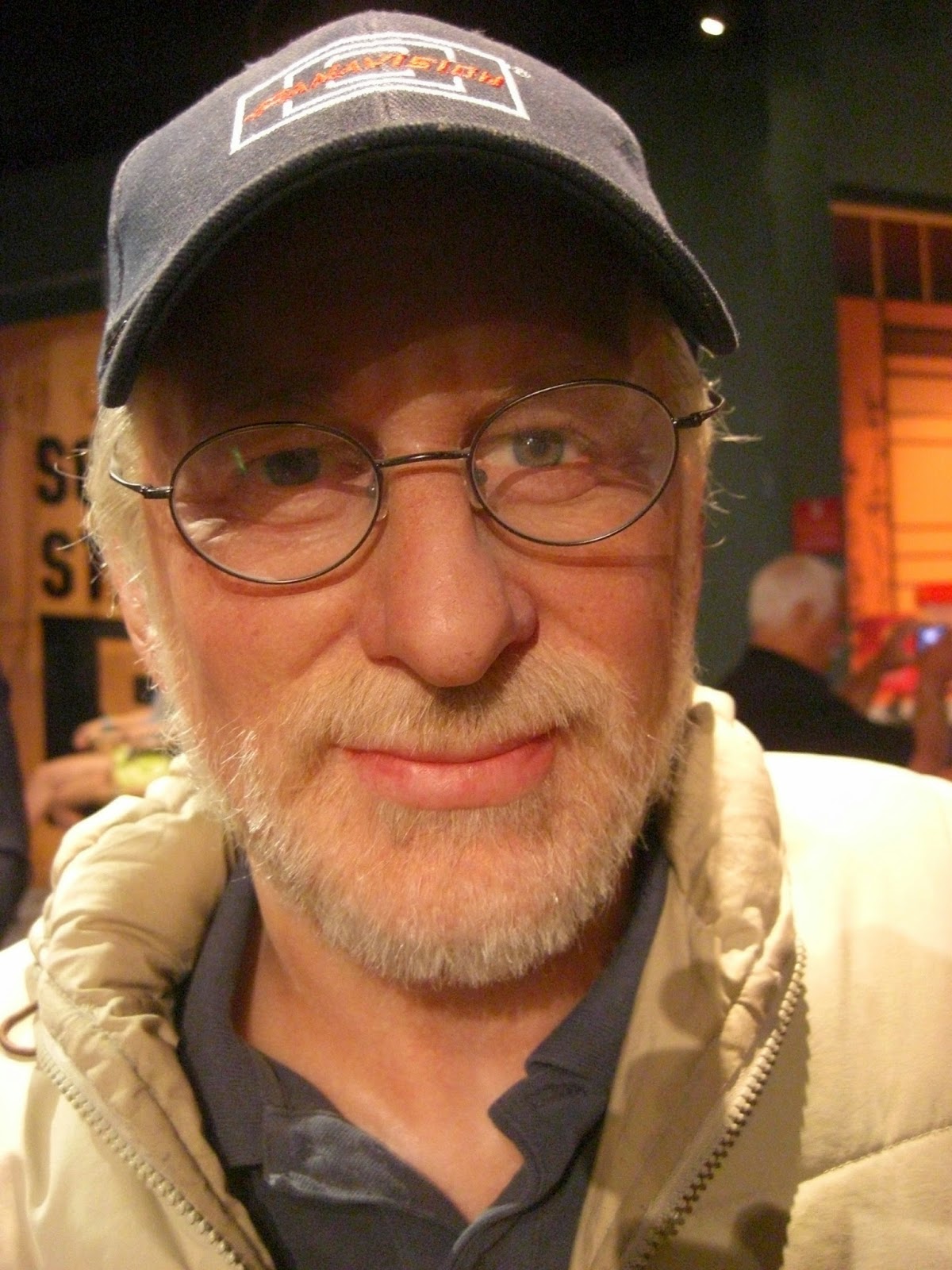